Khabib Nurmagomedov just RETIRED FROM MMA -- after choking out Justin Gaethje at UFC 254.

Khabib essentially said he doesn't want to continue in the sport without his father, Abdulmanap Nurmagomedov, who passed away earlier this year after a bout with COVID-19.

Khabib Nurmagomedov announced his retirement after #UFC254, walking away with an undefeated record of 29-0. pic.twitter.com/8zeppj5rZc

Gaethje proved dangerous -- throwing bombs as the lightweight champ -- but ultimately, Khabib's ground game was too strong ... and he caught Justin in a triangle choke in the 2nd round. Gaethje was rendered unconscious but came to moments later. He's fine.

Afterward, Khabib broke down in the Octagon sobbing ... overcome with emotion in his first fight since the passing of his father.

Justin and Khabib embraced after the fight -- nothing but respect between these two.

"God give me everything," Khabib said in the post fight interview ... "This is my last fight. Ain't no way I come here without my father."

Khabib says he's thought long and hard about his career -- and is certain his decision to retire will stand. It's not a publicity stunt.

In fact, Khabib left his gloves in the center of the Octagon -- a tradition from fighters to symbolize the end of their career.

Next stopgap UFC Hall of Fame ... he'll go down in MMA history as one of the greatest of all time.

Conor McGregor posted a respectful message to Khabib after the fight -- saying, "Good performance. I will carry on. Respect and condolences on your father again also."

"To you and family. Yours sincerely, The McGregors." 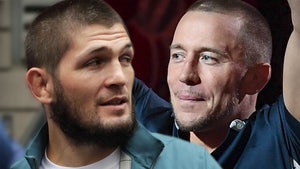