34-year-old Chavez -- son of boxing legend Julio Cesar Chavez Sr. -- believes the burglary took place last week while the family was out of town. We're told it appears the intruders got into the home through a bathroom window.

Our law enforcement sources tell us ... Chavez and his wife, Frida, believe the crooks snatched up several items, including a small safe that contained roughly $600,000 in jewelry and designer purses.

They also got around $150k in other belongings from around the home ... totaling $750k.

We're told cops are investigating but so far, no arrests have been made and no suspects have been named.

Chavez Jr. -- the former WBC middleweight champ -- is married to Frida Chavez, who recently gave birth to their 2nd child.

Edgar was killed in 2008 when he was ambushed in a supermarket parking lot by a gang of rival cartel members.

We're told police are aware of the family ties -- but it's unclear if the El Chapo connection has anything to do with the burglary. 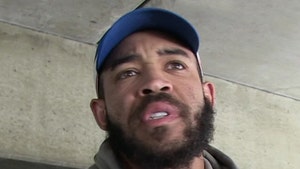