Tony Ferguson does NOT believe Khabib Nurmagomedov is retiring for good -- claiming the Dagestani will return to the octagon one day ... and Tony can't wait.

"You’re gonna miss it like [Conor McGregor]," Ferguson said on Submission Radio ... "He’s going to be back. So, I’ll be f*cking ready."

Khabib announced his retirement after defeating Justin Gaethje at UFC 254 -- saying he can't bring himself to fight again after the death of his father.

But Tony -- who was booked to fight Khabib on multiple occasions only to have the fights fall apart due to various issues -- claims he saw Khabib's retirement announcement coming from a mile away.

"I completely called it out," Ferguson said ... "I called it out on my post. You guys can see that. I called he was gonna retire."

"I promised my mother this is going to be my last fight."

"I only want one thing from the UFC, I want to be number one pound-for-pound fighter in the world."@TeamKhabib announces his retirement from MMA. Wow 🙏 #UFC254 pic.twitter.com/RFnCyu2X0W

Ferguson says Khabib's manager Ali Abdelaziz "did his job" by steering Khabib into fights with guys like Dustin Poirier and Justin Gaethje instead of him because "he kept his client safe."

"He kept [Khabib] away from very dangerous opponents. I mean, that’s what an agent and a manager is supposed to do. Although, he is a piece of sh*t, but I have to say, he did the smart thing. I mean, he avoided me at all f*cking costs."

Ferguson continued, "I mean, the Russians, they avoided me at all fucking costs. That’s f*cking awesome. So, you know what, I did my job. They ran. F*ckin’ Dagestani ran with his tail between his legs. But you know what, he’s off in the sunset."

Ferguson did offer Khabib "props" for handling his "family business" -- but predicts he will unretire just like Conor McGregor so they can finally settle things in the octagon once and for all.

For his part, Khabib says he's dead serious about retirement -- promising his mother he would stop fighting after the Gaethje victory.

But hey, things could change! 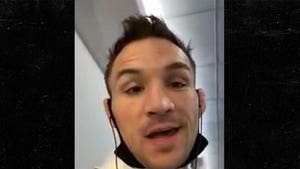