Patriots star James White says his mom is "doing better" weeks after she was involved in a horrific car crash ... but the running back explained it's still "a tough situation."

White's dad was killed and his mom was seriously injured in a horrible wreck in Florida back on Sept. 20 ... and there was some very real concern White's mother wouldn't recover.

But, James told reporters Wednesday she's doing well ... though wrapping her head around her injuries and the loss of her husband has been far from easy.

"She’s progressing physically," White said. "Obviously, a lot going on in her mind and things of that nature, but she’s continued to progress. I’m just trying to be there for her.”

White says even though he can't physically be close to her because of the Patriots' season ... he says he keeps in touch with her often and makes sure he's FaceTiming her as much as possible.

As we previously reported, White missed New England's Week 2 and Week 3 games this season grieving over the car crash ... but he's since returned to be a key player for the Pats. 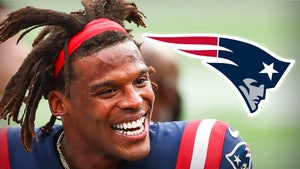