The Indianapolis Colts superstar actually checked his gloves Sunday before throwing them into the crowd ... dodging Wedding Ring Catastrophe Part II by the narrowest of margins!!!

If you ain't familiar ... back in September, Darius ripped off his gloves in celebration of a win and tossed them to a fan in the stands.

Turns out, though, his wedding ring had gotten stuck in one of the gloves ... and the 25-year-old linebacker had to beg on social media to get it back!!

His wedding ring got stuck once again in his glove - but the Maniac triple checked this time. @dsleon45 pic.twitter.com/Kqqbb2uQen

Fast forward to Sunday ... and after a huge win over the Green Bay Packers, Leonard wanted to give his gloves away again -- and nearly threw the ring with them AGAIN!!!

Fortunately for Darius, he learned his lesson and actually checked the gloves before launching them.

The video is pretty funny ... Leonard realizes his mistake just before throwing the gear -- and, thankfully, a Colts staffer was able to fish the ring out.

The jewelry was saved, the fans got the gloves ... and Darius is still living the happy-wife, happy-life lifestyle.

Congrats on the win AND the lesson learned! 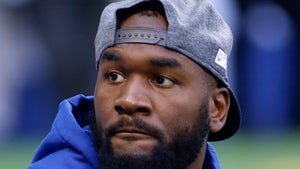