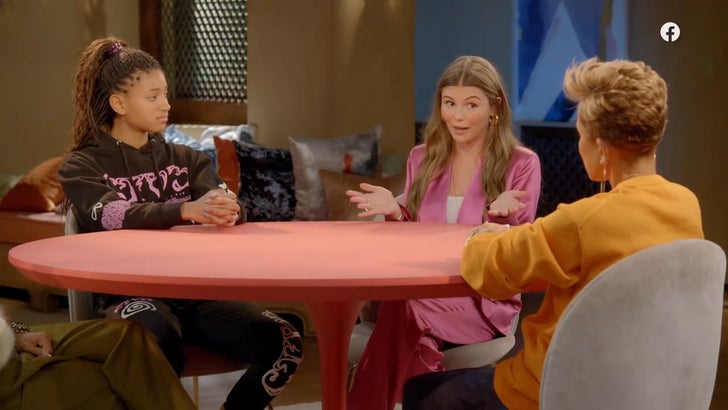 Olivia Jade's facing the music for her family's involvement in the college admissions scandal, claiming it opened her eyes to her privileged life ... and she's aiming to do better now.

Lori Loughlin and Mossimo Giannulli's youngest daughter got in the hot seat for a "Red Table Talk" with Jada Pinkett Smith, Willow Smith and Jada's mom, Adrienne Banfield-Jones, and the biggest takeaway from the interview ... Olivia was so blind to her white privilege, she didn't even realize what her parents did was wrong ... at first, anyway.

The popular YouTube influencer tells the women she's embarrassed and even calls herself the "poster child for white privilege."

Olivia admits she thought what her parents did to help her get into school was perfectly normal -- something all families like hers did -- and she was confused when they got in trouble.

Though she defends her parents' intentions and insists they're good people ... Olivia says she did realize something was amiss when news of her resume came out. However, she claims she was unaware of the illegal dealings of Rick Singer, who she says she trusted as a professional college counselor.

As for her parents ... it's pretty evident Olivia harbors no ill-will toward them, but says she hasn't been able to talk to them since they began serving their prison sentences ... due to COVID restrictions.

She does believe they deserve a second chance -- same goes for herself -- and to prove they are contrite.

As we first told you ... Olivia's sit-down also included a tense moment where Adrienne confronted her over her family's involvement in the college bribery scandal, asking her if she understood why people like her would be so upset.

Olivia said she did, but added she came on the show to learn more ... and admitted her parents used their means to help her gain an unfair advantage.

As you know ... Lori and Mossimo took plea deals for their roles in the admissions scandal, and are both currently serving short prison sentences.

Olivia's parents helped get her and her older sister, Isabella, accepted into USC by paying Singer $500,000. The scheme also included creating a bogus resume for Olivia making it look like she was a competitive rower aiming for a spot on USC's crew team.

Olivia's mom should be out right around Christmas, and her dad will be released in the spring.