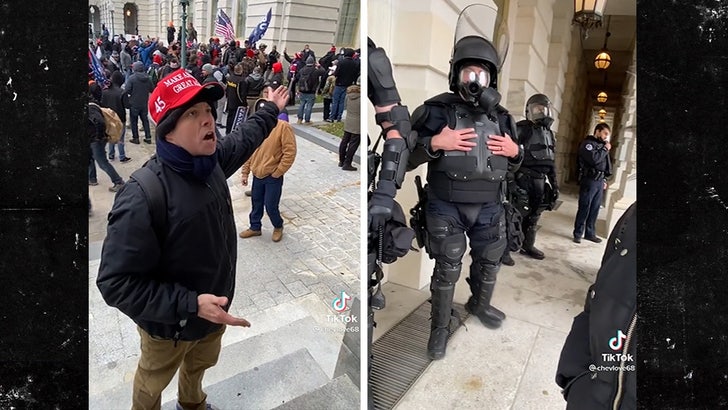 Not every Trumper at the U.S. Capitol was down with the siege ... or at least so it appears based on this one MAGA cap-wearing man's convo with Capitol Police in the middle of the riot.

Check out this clip that just surfaced from Jan. 6, when the guy approached a group of Capitol Police officers who were standing off to the side ... while the mob stormed into the building.

Some of the Capitol Police apparently colluded with the rioters and opened the gates to let them in. pic.twitter.com/7XqE06yPGz

The man's words here are telling ... he asks why the cops are letting this happen, and why they haven't called for backup -- noting this is the U.S. FREAKIN' CAPITOL THAT'S BEING INVADED, and that these people storming it are "out for blood."

It's not going to take Matlock to shred the continuous 'storming' claims.

Capitol police open doors for the protestors. They stand aside and invite them inside. pic.twitter.com/sO4AmbEO7z

Anyway, the officers didn't seem to respond at all, and the man continued his diatribe ... telling them that if no extra help was on the way, it means they don't care about what's happening to the Capitol.

The whole thing is pretty ironic -- a clear Trump supporter right in the thick of the action denouncing the act of breaching the premises. Now, we have no idea what his motives were here, or if he was genuinely separating himself from the illegal activity.

We'll say this ... he does seem to rejoin the mob as the video ends, but we have no way of knowing if he actually went inside the Capitol.

Let me get this straight, Capitol police let in less than 200 people, some in costumes, pictures, and videos were taken, and then Capitol police escorted them out. And this is what the communist-socialist media calls the great DC RIOT! pic.twitter.com/9U3yxiJiKx

As we first reported, the FBI is investigating a possible Capitol inside job that allowed the siege to take place. And, of course, the Capitol Police Chief resigned too ... not to mention multiple suspensions and firings that have taken place since. 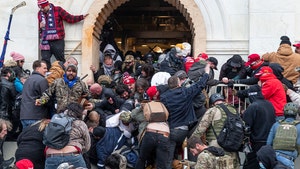