Breathe easy, Green Bay ... Aaron Rodgers has clarified his comments -- and the superstar QB is now saying he believes he'll still be a Packer next year.

"I don't think that there's any reason why I wouldn't be back," Rodgers said Tuesday.

Aaron made the statement on "The Pat McAfee Show" ... explaining he was surprised by the way his postgame comments Sunday made so many people believe he wanted out of Wisconsin.

"I don't feel like I said anything that I hadn't said before.. It was just more of a realization I think that ultimately my future is not necessarily in my control...

If you missed it, Rodgers -- just minutes after losing in the NFC title game to Tom Brady in heartbreaking fashion -- told reporters he was "uncertain" of his future in Green Bay.

Because of the way the team had just lost, and given how it had drafted quarterback Jordan Love in the 1st round in the offseason ... a lot of folks took that as a goodbye from Rodgers.

Aaron Rodgers after the game: “A lot of guys futures, they’re uncertain, myself included. ... Just gonna have to take some time away and clear my head and kind of see what's going on with everything." pic.twitter.com/3GlzPU9EsZ

But, Aaron told McAfee and A.J. Hawk on Tuesday that he wasn't implying anything with his comments ... and an uncertain future is just part of the game in the NFL.

"There's not many absolutes -- as you guys know -- in this business," Rodgers said. "So, to make an absolute statement about something that is not an absolute, I didn't do it. I guess that's why it kind of, went kind of nuts."

Rodgers explained he's always wanted to remain a Packer for life -- similar to Kobe Bryant with the Lakers and Derek Jeter with the Yankees.

"Naturally, you dream about that," Rodgers said.

FYI -- Packers brass is clearly on the same page as Rodgers ... team president Mark Murphy said Tuesday, "We're not idiots. Aaron Rodgers will be back, he's our leader." 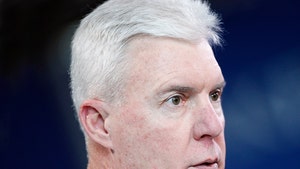