The G.O.A.T. of football has silenced critics who said he couldn't do it without Bill Belichick ... because Tom Brady's heading to another Super Bowl, now with a whole new team.

The star QB led his new squad, the Tampa Bay Buccaneers, to Super Bowl LV Sunday with a hard-fought win over Aaron Rodgers and the Green Bay Packers in the NFC Championship game ... the first time they've been to the big show since 2002, and only the second time ever in their franchise history.

The Bucs ended up squeaking out a victory at 31-26, despite Brady throwing several interceptions in the second half ... giving Rodgers and co. multiple opportunities to gain the lead. That didn't happen though, and Tom was able to string together enough touchdown passes early on to give him and his teammates a big enough cushion to fend off AR.

Rodgers was 10 yards and a 2-point conversion away from tying it late in the 4th quarter, but he and his head coach made a pair of head-scratching decisions that ended up costing them the game. First, on 3rd and goal ... Rodgers broke out of the pocket during a scramble and ended up throwing the ball away, when he had a fairly clear path to the goal line.

Then, on 4th down ... Packers head coach Matt LaFleur opted for a 3-point field goal instead of just going for it and trying to get a touchdown, as it was the last realistic opportunity before the game was sealed. The screw-ups played in favor of Brady ... who held on long enough.

Someone please tell me why Aaron Rodgers didn’t run this. He had a clear lane right to the end zone pic.twitter.com/IIxqeKeARv

It's his first season with the Bucs ... and already, he's taking them to greatness. This will mark his 10th Super Bowl appearance -- alongside none other than Rob Gronkowski, another Patriots castoff -- and he did it without the assistance of his former head coach and partner in gridiron crime, Belichick.

There's long been a debate over whether Brady's success and greatness was exclusively tied to Belichick's play-calling, or if it was the other way around ... and if TB12 was the one carrying Bill all along. We're sure that's still debatable, but one thing's clear ... Tom doesn't need Bill to get to a Super Bowl, not after this.

The Buccaneers will face off against either the Buffalo Bills or the Kansas City Chiefs on Feb. 7. Right now, the Bills are ahead -- but there's still a lot of game to play. In any case, congrats to the greatest quarterback to ever do it. Quite an achievement, we must say! 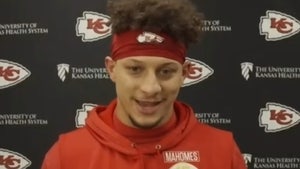