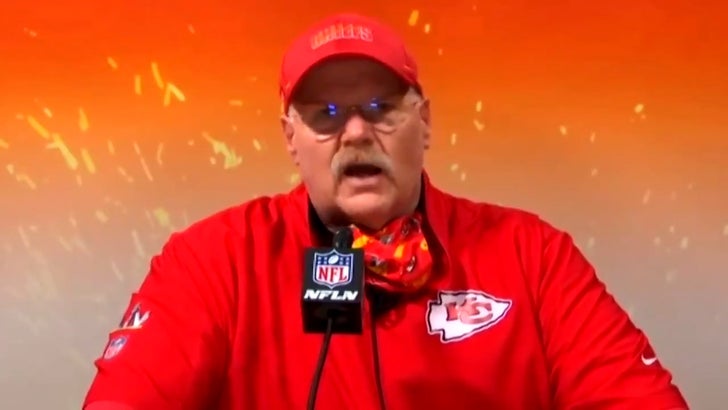 6:57 AM PT -- 2/8 -- Kansas City Chiefs head coach Andy Reid finally broke his silence about the crash after the Super Bowl ... saying his "heart bleeds" for the victims.

"I know I haven't had a chance to address you since the accident happened that my son was involved in," Reid told the media Sunday evening.

"My heart goes out to all those who were involved in the accident, particularly the family with the little girl who's fighting for her life."

Reid said the whole thing is a "tough situation" and he's been advised by his legal team to not comment on the accident or the investigation.

But Reid added, "Just from a human standpoint, man, my heart bleeds for everybody involved in that."

2:56 PM PT -- 2/6 -- We just learned new information about the 5-year-old who was left injured in the car crash to which Britt Reid has been linked -- she's a little girl, and she's fighting for her life.

A GoFundMe has been started for Ariel, who's been identified as the child severely injured in the crash. Her family says she's suffered major brain damage -- namely swelling and internal bleeding. Her aunt posted photos of her in the hospital with a ventilator attached ... she says Ariel hasn't woken up since the accident.

She goes on to explain that Ariel's mother is a single mom with three kids ... and that the money they're raising here will go toward medical bills and to cover time off work her mom will miss. They've got a goal of $45k, and are about halfway there now.

It's all spelled out in a search warrant obtained by KCTV ... in which officers say the 35-year-old reeked of booze and had bloodshot eyes in the moments after the accident.

According to the warrant, Reid ADMITTED to officers he had consumed 2 to 3 drinks earlier in the evening and was on Adderall, a prescription medication.

As part of the investigation, cops say they took 4 vials of blood from Reid to test his blood alcohol levels.

Plus, they note Red did not perform well on field sobriety tests.

As for the crash, officials believe Reid was driving a pickup truck that slammed into 2 cars that were pulled over on the side of an on-ramp to the I-435 highway.

One of the cars had reportedly run out of gas and had called for another vehicle to assist -- when Reid's truck came crashing into both vehicles.

A 5-year-old in one of the vehicles sustained critical injuries and was transported to a nearby hospital with life-threatening injuries.

A 4-year-old child was also in one of the vehicles but miraculously suffered only minor injuries.

The Chiefs released a statement Friday ... saying, "The organization has been made aware of a multi-vehicle accident involving Outside Linebackers Coach, Britt Reid."

"We are in the process of gathering information, and we will have no further comment at this time. Our thoughts and prayers are with everyone involved."

The Chiefs are preparing to play the Tampa Bay Bucs in the Super Bowl on Sunday.

The Chicago Sun-Times is now reporting Britt is NOT expected to travel with the team to Tampa Bay for the game.

Britt spent several months in jail in 2007 following multiple disturbing allegations -- including a road rage incident and crashing his truck in a parking lot while under the influence, according to the Philadelphia Inquirer.

Andy Reid's oldest son, Garrett, also had issues with substance abuse -- he was sentenced to 23 months behind bars for a 2007 crash while he was high on heroin.

Garrett struggled with addiction for years and ultimately died of a heroin overdose in 2012 while in his room at the Philadelphia Eagles training camp, while his father was coaching the team. 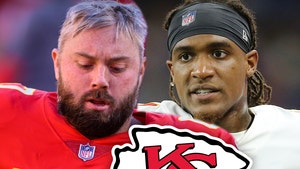 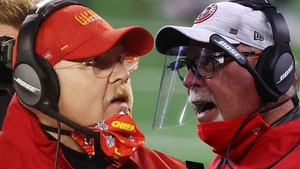