Good news for Von Miller ... the NFL superstar is officially off the hook after a secret investigation into alleged criminal behavior.

The Douglas County District Attorney's Office in Colorado announced Friday it will NOT pursue criminal charges against the Denver Broncos star -- but officials are still quiet on why he was being investigated in the first place.

As we previously reported ... back in January, the Parker Police Dept. announced an investigation into Miller and later presented its finding to the Douglas County D.A.'s office.

Again, no one ever discussed what the nature of the investigation was ... or the specific allegations against Miller.

But, prosecutors ultimately decided the case against Miller wasn't strong enough to get a conviction -- so he's off the hook.

"Based on our review of information that is currently available, we cannot meet that standard [to prove guilt beyond a reasonable doubt] and must decline to file charges in this case," a spokesperson for the D.A.'s office said in a statement.

"It would be inappropriate to comment about details of an investigation in which there was never a citation, arrest or filing. The complainant, suspect and witnesses have a legitimate privacy interest and we will respect that."

In other words, whatever was being investigated will remain under wraps ... for good.

In theory, the NFL could still levy punishment against the Super Bowl 50 MVP if they find he violated the NFL's Personal Conduct Policy ... but no word on whether they were able to obtain any more information than the public. 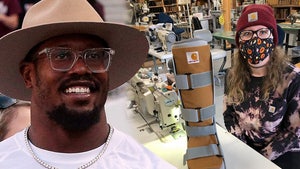