Despite being hit with criminal charges in connection with the horrific death of a pregnant woman and her unborn child ... boxer Felix Verdejo WILL continue to have a contract with Top Rank as long he's not convicted -- so says Bob Arum.

The legendary boxing promoter explained the situation in an interview with WAPA-TV this week ... saying he has no plans to cut Verdejo at this time, even in light of the disturbing allegations against the 27-year-old.

"A man -- no matter how bad it looks -- is innocent until proven guilty," Arum says.

"And, we will not release him from the contract and terminate our relationship with him unless or until he's convicted."

While Arum's point is legitimate -- Verdejo's got a mountain to climb to avoid a conviction ... because there seems to be a ton of very compelling evidence against him as it relates to the death of 27-year-old Keishla Rodriguez and her unborn child.

Law enforcement says a witness has come forward and claimed he helped Verdejo kill the woman in Puerto Rico last week ... saying the boxer abducted her, punched her, injected her with foreign substances, and ultimately threw her off a bridge with a heavy block tied to her.

Law enforcement says cell phone data appears to corroborate the witness' story. Investigators also say they have surveillance video which appears to show a dark SUV at the scene of the crime similar to the one Verdejo had previously been spotted with.

Still, Arum says, "We're not going to release him until and unless he is convicted."

Verdejo surrendered to Puerto Rican authorities over the weekend ... and is currently being held without bail.

Puerto Rican newspaper El Vocero de Puerto Rico reports he's due in court on May 11 for a hearing in the case. 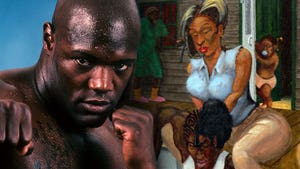