New Detroit Lions coach Dan Campbell is pleading with team execs to allow him to walk around the facilities with a real-life lion ... saying he's dead serious about adopting a big cat!!

"I would love to literally just have a pet lion," Campbell said. "Just a legit pet lion. On a chain -- a big-ass chain."

The 45-year-old coach explained the thought process on Barstool Sports' "Pardon My Take" podcast this week ... saying he believes the animal could help motivate his squad to win games.

Dan Campbell wants to have a actual pet lion who follows him around this year at the team facilty, and he would feed him arm to it for a superbowl. Football guy @PardonMyTake pic.twitter.com/6bPjVzdvXG

"He really is my pet," Campbell said of how he'd treat the beast. "We just walk around the building. We go out to practice. We're in 7-on-7. We're behind the kicker when he's kicking. We're just -- there we are."

Campbell added, "I mean, think about it. It'd be outstanding."

Campbell says he's approached team owner Sheila Ford about the plan ... but, sadly, he admitted there might be too many issues with it all to make it actually happen.

"The problem -- I don't know if PETA is going to allow that," Campbell said. "That's going to be hard."

SPOILER -- PETA WILL NEVER EVER APPROVE THAT IN A MILLION, BAZILLION YEARS BECAUSE LIONS AREN'T SUPPOSED TO BE PETS!!

That said ... if he somehow gets a lion, Campbell promised he'd take great care of the king of the jungle ... and even said he'd let it eat his arm if it meant a Super Bowl ring!!

"That would be better," Campbell said. "'Cause it would validate -- this is a freakin' -- this is a creature now. This is an animal. This thing is from the wild."

Campbell's yet to win a game for the Lions ... but he's undefeated in meetings with the media right now -- and we seriously can't get enough of it. 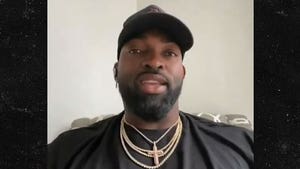 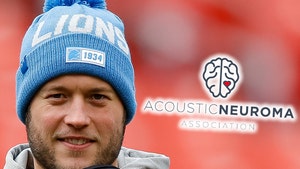