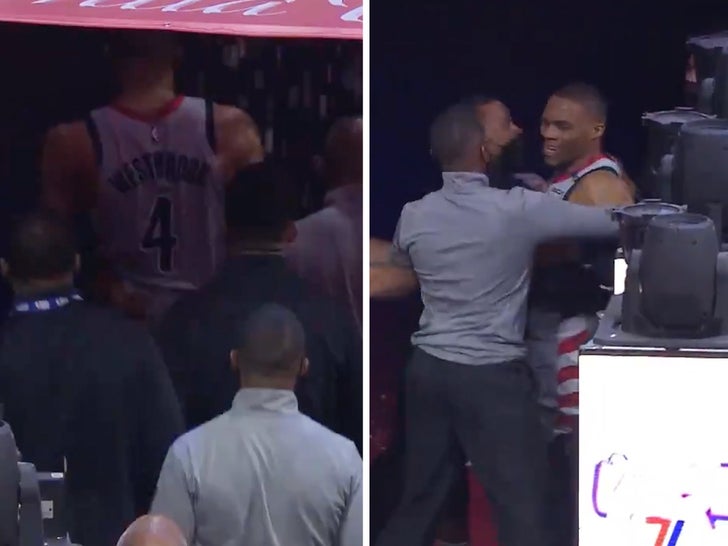 8:15 AM PT -- The 76ers say they've identified the popcorn-throwing fan and have pulled his season ticket membership AND hit him with an indefinite ban "from all events" at the arena.

"We apologize to Russell Westbrook and the Washington Wizards for being subjected to this type of unacceptable and disrespectful behavior," the Sixers said in a statement Thursday.

"There is no place for it in our sport or arena."

Russell Westbrook was LIVID after a fan dumped popcorn on his head Wednesday -- calling the person's actions straight-up "bulls***" -- and even LeBron James is pissed over it all now too.

Westbrook was on his way to the locker room after injuring his ankle during the Wizards' playoff loss to the 76ers in Philly ... when a fan poured their bucket all over the NBA star.

Russell Westbrook left the game after an apparent ankle injury... Then a fan showered him with popcorn. pic.twitter.com/Q26rHhO50e

You can see in footage of the incident ... Westbrook could not have been more heated as the kernels bounced off his head -- with the D.C. point guard trying HARD to get to the stands to confront the fan.

Russ, though, was eventually calmed down and ushered into the locker room ... but after the game, he said the fan absolutely crossed the line.

"To be blatantly honest, man, this s**t is getting out of hand, especially for me," Westbrook told reporters. "The amount of disrespect, the amount of fans just doing whatever the f**k they want to do, it's just out of pocket, man. It's out of pocket, seriously." 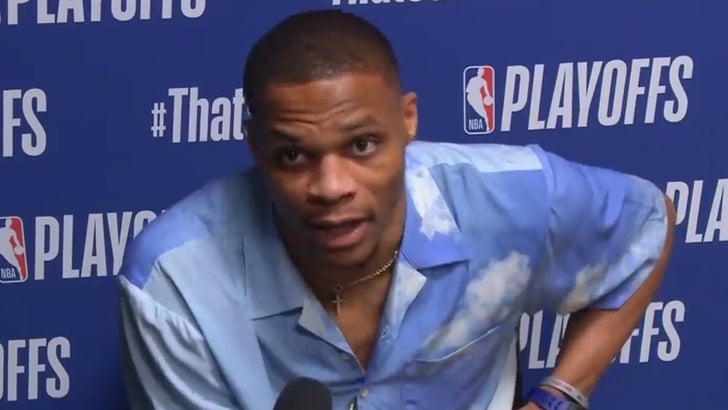 Russ went on to say if the incident had happened in "any other setting," he insinuated he would've fought the person.

"A guy wouldn't come up on the street and pour popcorn on my head because he knows what would happen," Russ said.

Westbrook then pled with the NBA to "start protecting the players" ... adding, "We'll see what the NBA does."

LeBron James rushed in to defend his pal on Twitter shortly after ... saying he wanted the fan ID'ed and punished ASAP.

By the way WE AS THE PLAYERS wanna see who threw that popcorn on Russ while he was leaving the game tonight with a injury!! There’s cameras all over arenas so there’s no excuse! Cause if the 👟 was on the other 🦶🏾.🎥 #ProtectOurPlayers

"WE AS THE PLAYERS wanna see who threw that popcorn on Russ while he was leaving the game tonight with a injury!!" LeBron wrote. "There’s cameras all over arenas so there’s no excuse! Cause if the [shoe] was on the other [foot]. #ProtectOurPlayers"

So far, no punishment from the NBA has been announced yet ... though high-ranking Wells Fargo Center exec Valerie Camillo did call the incident "classless" and "unacceptable" after the game.

It's unclear, meanwhile, if Russ' ankle injury will keep him out of Game 3 ... the series is set to return to Washington on Saturday with the Sixers up 2-0. 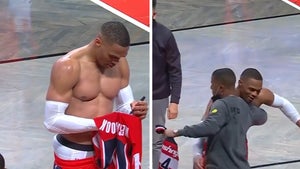 Russell Westbrook Gives Jersey Off Back to Michael B. Jordan, Flaunts Insane Abs 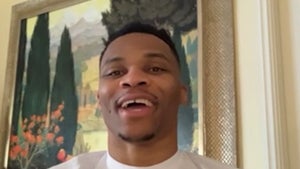