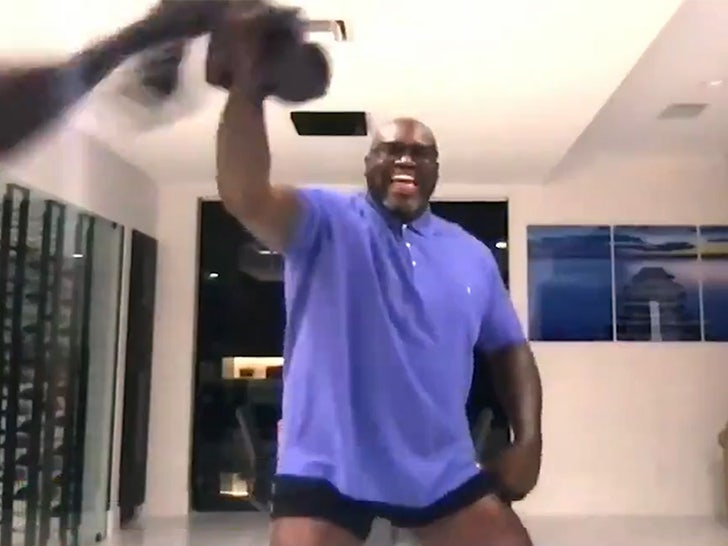 We see London, we see France ... we see SHAQ'S UNDERPANTS!!!

Shaquille O'Neal is out to prove the quarantine look is still in style ... with the NBA legend going business up top, nothing on the bottom for a live TV segment!!

Of course, we've all been there at some point in the pandemic ... but the Hall of Famer had no problem showing off his skivvies while on air for NBA TV Thursday night.

The Big Aristotle had just finished his final segment of the 2021 season after the Suns beat the Bucks in Game 2 of the NBA Finals ... and decided to celebrate by hopping up and dancing like crazy!!

.@SHAQ & @TheJetOnTNT had to celebrate their last segment of the NBA season 🤣 pic.twitter.com/Laiw1tLCPD

The 7'1", 330-lb. big man even pulled a Petey Pablo by taking his blazer off, twistin' it around his hand and spinnin' it like a helicopter.

O'Neal even started doing jumping jacks ... later admitting it made him "tired as hell."

The moment is hilarious ... and even his fellow "Inside the NBA" analyst pal, Kenny "The Jet" Smith, had to get in on the party -- although it appears he was fully clothed.

Hey, Shaq and Kenny deserve the break -- as Smith points out, it was basically 2 NBA seasons back to back, thanks to the pandemic.

Now, the guys can enjoy their extra free time in their underwear ... but hopefully we don't have to see it all over national TV next time??