1:55 PM PT -- Kovac tells us, "I am disappointed to see these accusations from Tommy against me, 10th Street Management and Better Noise Music. They are categorically false. In 40 years in the music business, I have never made any derogatory racist comments, been accused of doing so, or been sued by an artist. Tommy Vext, a self-proclaimed QAnon supporter, has dragged us into a ridiculous, unfounded narrative that falsely paints him as a victim."

He continues, "Behind the scenes, he and his team of lawyers have been trying to extort the band and the record company for a big payout. Because these tactics were not successful, he upped the ante and filed this bogus and spurious lawsuit to get leverage in contract negotiations. But this strategic ploy won’t work. We will not be extorted; and will defend and defeat these phony claims in court."

Ex-Bad Wolves frontman Tommy Vext wasn't "black enough" to be part of the band due to his political stances and support for Donald Trump ... so he claims in a new lawsuit against his ex-manager, who allegedly openly dropped n-bombs.

Vext's suing Allen Kovac claiming that, in response to major political differences between them, Kovac cooked up a scheme to steal the heavy metal band they co-founded in 2017.

In legal docs, obtained by TMZ, Vext says Kovack disagreed with his social media posts criticizing protests in L.A. and Portland, as well as statements he made about the attack on the U.S. Capitol.

And, because of that, Vext alleges Kovac launched a campaign to drive him out of music by demanding radio and streaming services stop playing Bad Wolves -- and they complied because Kovac has that kinda "pull" in the industry.

In the docs, Vext claims Kovac tried to block him from making political statements ... and when he refused to be silenced, Kovac tried and failed to try to buy Bad Wolves. That's when Kovac set about getting Vext booted ... according to Vext, anyway.

Vext, who is Black, believes his old bandmates soiled his good name by locking him out of the band's social media, and insinuating he "was not black enough" because of his political statements.

Vext is also accusing Kovac of regularly and openly using "n*****" in casual convos to belittle him, though he doesn't indicate how the alleged racism relates to his lawsuit. Vext only says it caused him to feel intimidated by Kovac ... "an executive showing he clearly felt so powerful as to think he could use the word with impunity."

He's suing for breach of contract and breach of fiduciary duty, and wants tens of millions of dollars in damages.

Tommy tells TMZ, "For several years I've poured all of my energy and passion into building Bad Wolves. We've toured the world several times and charted 6 billboard number 1 singles. All the while I've had to endure disparaging, manipulative and at times racially charged misconduct from my former manager Allen Kovak and his record company Better Noise Music."

He continues, "Allen has forced me out of my own band and is now attempting to slander and cancel me. After several failed attempts to settle amicably, I'm now forced to place this in the hands of the courts." 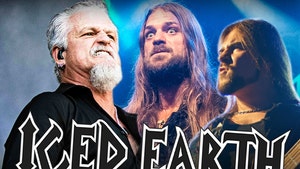