Ben Simmons is NOT persona non grata in the Philadelphia 76ers locker room ... 'cause teammate Tobias Harris says the team will welcome the All-Star back with open arms when he's ready to go.

The 25-year-old -- who demanded a trade earlier this year -- spoke with coach Doc Rivers and teammates Friday morning ... reportedly telling them he's not mentally ready to play.

He also accepted the fact he -- as well as the team -- needs to take responsibility for how things have transpired.

While superstar Joel Embiid previously sounded off against the Simmons/Sixers saga, at least one team leader is backing #25 ... with Harris speaking out and saying the team will "respect his privacy and space during this time."

“At this point, I don’t care about that man. He does what he wants”

"When he’s ready, we will embrace our brother with love and handle our business on the court," Harris said. "That's it, that's all."

Sixers GM Daryl Morey recently said the drama could last for the entirety of Simmons' contract, which ends in 4 years ... but now that the star is getting support from teammates, it could all be over sooner than later. 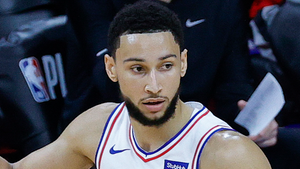