Steve Aoki might be able to throw a cake with pinpoint accuracy -- but he sure as hell can't do the same with a baseball, 'cause he absolutely airmailed the ceremonial first pitch at the Red Sox game on Monday night ... and it was truly awful.

The DJ took the mound just minutes before Boston faced off with the Astros at Fenway Park ... and, given the results of the pitch, he's honestly probably wishing he hadn't.

Aoki warmed up his left arm, toed the rubber -- and then heaved a ball that went roughly 20 feet over his catcher's head. It was actually so bad, it rolled over the net behind home plate and fell into the crowd.

Video shot by people in the stadium shows fans were laughing at the pitch -- because it was seriously just that bad.

@steveaoki threw out tonight’s first pitch @fenwaypark , it was just a little bit outside the strike zone…. pic.twitter.com/j0OstKrxQe

To his credit, Aoki had fun with the moment ... tweeting after the heave, "i’m gonna stick to throwing cakes."

Of course, Aoki is far from the first celeb to embarrass himself on an MLB diamond ... you'll recall, 50 Cent is known for the worst ever, throwing one sideways in 2014.

And, it ain't like Dr. Fauci's toss in Washington was much better in 2020. 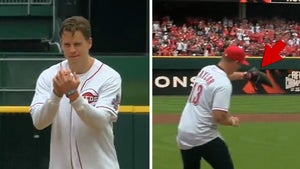