Boosie Badazz thinks Nas and Jay-Z's time in the spotlight is fading fast -- if not totally gone already -- but he insists he's saying that with the utmost respect!!!

The Louisiana rapper recently jumped into his favorite hot seat over at VladTV to dissect the NYC icons' careers ... on the heels of 21 Savage's viral remark that Nas is irrelevant to today's rap fans.

Boosie says when he goes into clubs with folks in their early 30s, he NEVER hears Jay or Nas tracks played … a clear sign they’ve been replaced on the scene.

Vlad argues Nas has been steadily pumping out music, to which Boosie counters ... those songs are strictly for the enjoyment of his established fan base, not to draw new ones.

Boosie did give Jay props on the business side, and Nas for winning the 2020 Best Rap Album Grammy -- but he's still pretty much aligned with 21 Savage's previous Clubhouse comments.

Someone should pass Boosie the memo … per their new song collab, 21 now thinks Nas is plenty relevant!!! 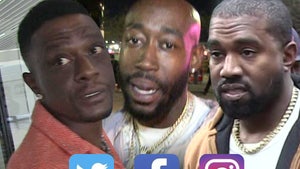