Ashanti is opening up about an unsavory encounter, to put it lightly, she had with a music producer who tried to force her into sex ... as payment for studio recordings.

She exposed the incident Thursday while she was on "The Breakfast Club" ... saying she and the producer had been working closely together for a couple of weeks -- and he'd told her he'd do it for free because she was "the homie."

Ashanti says she and the producer created 2 songs but then he flipped the script … suggesting they take a shower together or else she would have to pay $40,000 a piece for the tracks!!! WTFFF?!?

After realizing he wasn't joking, Ashanti says she made a couple of phone calls to "handle the situation." It's anyone's guess what that means, but her mom Tina Douglas stepped in to confirm the story.

They also hinted at exposing the studio creep in the future in her memoir.

Sadly, the situation wasn't the first time Ashanti had to dial 911 within her inner circle.

During a recent appearance on "Red Table Talk," Ashanti also admitted to "making calls" after her younger sister Kenashia was the victim of a brutal domestic violence attack. 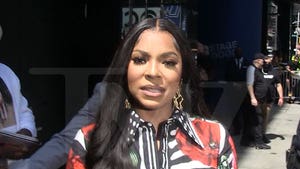