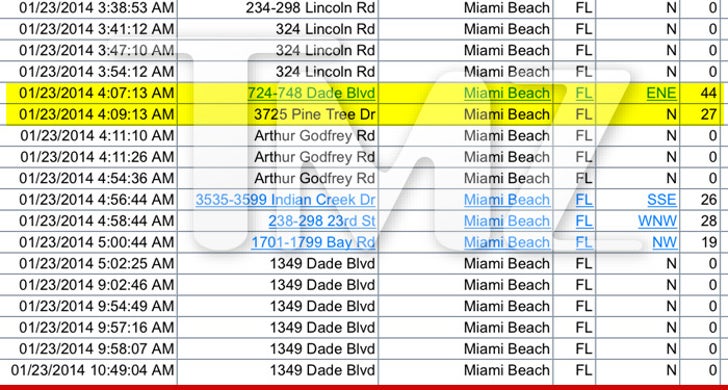 TMZ has obtained GPS records from the rented Lambo Justin Bieber was driving when he was arrested for DUI ... and there is NO evidence of drag racing.

TMZ broke the story ... Miami Beach cops claimed they noticed Bieber and his buddy Khalil (who drove a red Ferrari) drag racing and that's why they were stopped. Cops claimed they were going between 55 and 60 MPH.

But the GPS on Justin's car records speed when the car accelerates quickly. Take a look at the read-out. At 4:07 AM Justin left the club and zoomed away ... reaching a maximum speed of 44 MPH. Two minutes later the GPS registered at a max speed of 27 MPH.

Here's why the read-out is so significant. Cops claim they noticed the drag race on the 2600 block of Pine Tree Drive. Bieber came to a stop and was then arrested on the 4100 block. The 27 MPH read out is on the 3700 block ... smack in the middle of the supposed drag race. Mind you ... 27 MPH is UNDER the 30 MPH speed limit.

If Justin had been racing ... the GPS would have recorded a higher speed. Yet the maximum speed on Pine Tree was 27 MPH.

Now check this out. The cops say 2 Escalades were stopped on Pine Tree to block traffic so Bieber and his buddy could drag race. We obtained the GPS for one of the Escalades (below) which shows at 2:35 AM the SUV stopped -- and that's when Bieber's dad (who was in the Escalade) went inside the nightclub with his son. They were there for 1.2 hours.

At 4:06 AM the Escalade started rolling and it didn't stop again until Bieber was pulled over. So it never stopped to accommodate a so-called drag race.

This could present huge problems for prosecutors, because if the pretext of stopping Bieber's car proves false, it could derail the case. Which is probably why TMZ's videos of Justin's cars were subpoenaed. Problem is ... the videos don't show drag racing either. 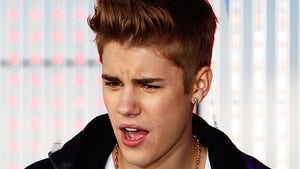 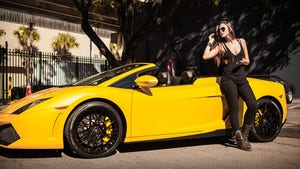