The rented Lambo Justin Bieber was driving before his DUI arrest is now practically a celebrity itself -- in fact, so famous ... it's become a Holy Grail for Bieber fanatics and modeling shoots.

Good example ... here's 24-year-old Miami smokeshow Madison Murray rubbing her ass on the car at a showroom on Tuesday.

Sure, it's a yellow Lambo -- who wouldn't want to pose beside it -- but sources tell us, Justin's car has made such a reputation for itself this month ... local models are practically clawing at each other to get a photo op.

And it's not just models ... a source at Miami's Lou La Vie exotic car rental -- which owns the whip -- tells us, the company's been inundated with calls from crazy Bieber fans too ... asking to rent it just for a day to take photos at the DUI arrest site.

Get in line, Beliebers. 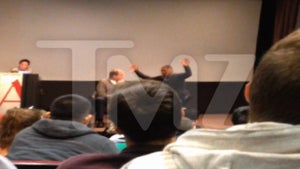 Keyshawn Johnson -- I Went All HULK Outside Justin Bieber's House ... He's A 'WEASEL'