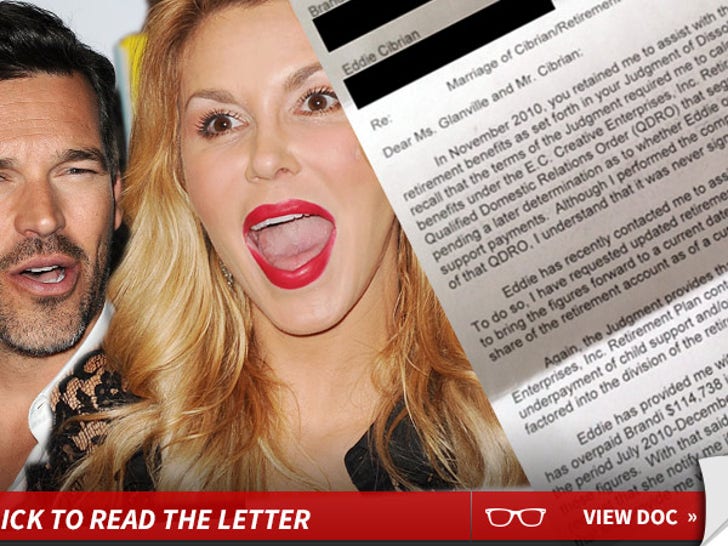 Eddie Cibrian has overpaid Brandi Glanville more than $100k in spousal support ... and he's gunning to get it back -- and his people tell us Brandi is a bald-faced LIAR in trying to spin what really happened.

The former couple is still sparring over money, and they hired a law firm to help figure out who owes what. The attorney sent both Eddie and Brandi this letter which says after a full audit Eddie paid Brandi $114,738 too much in alimony.

Multiple sources connected with the audit confirm to TMZ ... although the document merely refers to the overpayment as "support" ... the overpayment is for SPOUSAL support, not child support.

Brandi has tweeted, "...Mr. fancy new cars&house man is asking ME for child support." We're told that is FALSE. Eddie's people tell us, "It's a complete lie." Furthermore, our sources make it clear child support has nothing to do with the overpayment.

As for how Eddie expects Brandi to pay him back ... according to the lawyer's letter, it will be subtracted from her share of his retirement accounts.

Brandi's lawyer, Ron Rale, tells TMZ, "The lawyer who sent the letter does not represent Brandi in connection with Eddie's calculation of alleged overpayment of support." Rale adds, "It appears to me Eddie is trying at least in part to get back some of the child support he paid."