Rob Gronkowski proved he's shaved from head to toe -- ripping off his shirt and partying with Flo Rida at Shrine at the Foxwoods Resort Casino in Connecticut ... and we got the pics.

Gronk and Flo have been friends for a while -- the rapper was a special guest on Gronk's legendary party cruise last off-season.

Per usual with Gronk, the guy goes on a party tear before the season begins ... and Tom Brady has previously said he doesn't care as long as the guy shows up ready to play when it counts.

No word on if anyone ever found Gronk's shirt. 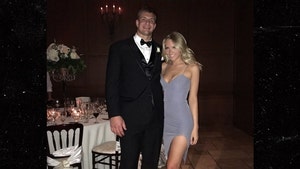