Chad Johnson says NFL protests have been "politically whitewashed from why it started in the first place" -- and says kneeling has turned into "a goddamn Ice Bucket Challenge."

The ex-NFL superstar was smokin' a stogie in West Hollywood on Thursday when we asked how he felt about the Denver Broncos releasing a statement saying they will no longer kneel for the anthem.

Johnson sighed ... and said the whole protest situation in the NFL has become "unfortunate."

"We're not kneeling for the same reasons that Kaepernick kneeled for 14 months ago," Johnson said ... "It's completely different."

Johnson essentially echoed the feelings of L.A. Sparks player Essence Carson -- who told us why she's upset people have made the protest about the flag and Trump ... instead of racism and police brutality. 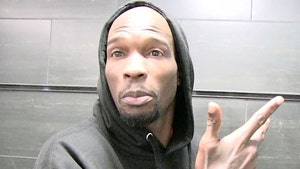 Chad Ochocinco: New ZO2's Are 'F**king Dope,' Excited To Get Mine!