It ain't Holly Holm. It ain't Cyborg. There's only one fighter who could possibly entice Ronda Rousey to get back into the octagon ... at least, that's what Tyron Woodley thinks.

The UFC welterweight champ says he's all about Ronda making the transition to the WWE -- but if she's still got some fight left ... there's one legend who could be Ronda's perfect MMA dance partner.

Tyron got into it during his brand new show, "The Hollywood Beatdown" -- which drops every Friday on the TMZ Sports YouTube channel.

This week, Tyron hits everything from Harvey Weinstein to Eminem's anti-Trump rap session ... and even tells what REALLY went down between him and Dana White after UFC 214.

Tyron Woodley: Forget Friendship, Andre Ward and I Should Fight 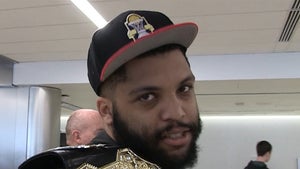