On this week's episode of "The Hollywood Beatdown" -- the UFC welterweight champ reveals his very real fear of Khabib ... who absolutely mauled Edson Barboza at UFC 219.

So once Tyron found out we asked Khabib about a potential throw-down, his reaction was pretty much what you'd expect.

"Why you gonna stick this maniac on me?! Don't try to throw me in there with a dude who's fighting bears!!!"

That's not a joke. A young Khabib REALLY WRESTLED BEARS.

Also on the Beatdown, Woodley reveals a huge NFL star he's bringing to the big screen ... and explains why Logan Paul should get smacked. 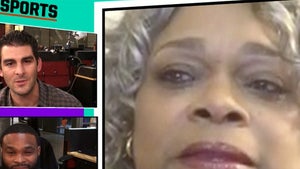