Yep, Bronny James is basically a 5'10" version of LeBron James ... and the NBA superstar's 14-year-old son put on an absolute clinic in his Crossroads debut on Monday ... droppin' 27 points!!

King James' kid suited up for the Roadrunners for the first time since making the move to California ... sporting Bron's iconic #23 jersey and dominating the game just like Daddy.

Remember, he's only an 8th grader.

LBJ loved what he saw ... cheering on Bronny from the stands throughout the game.

According to reports, school officials tried to keep the game quiet -- meaning, there wasn't a massive publicity push to draw eyeballs to watch James. The school's athletic director reportedly said they want Bronny's school experience to be as normal as possible.

It's fun to watch now ... but the real treat will be when Bronny teams up with Shaq's son, Shaqir, next season. 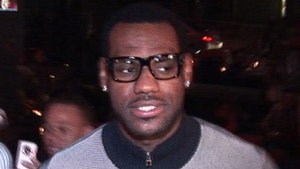