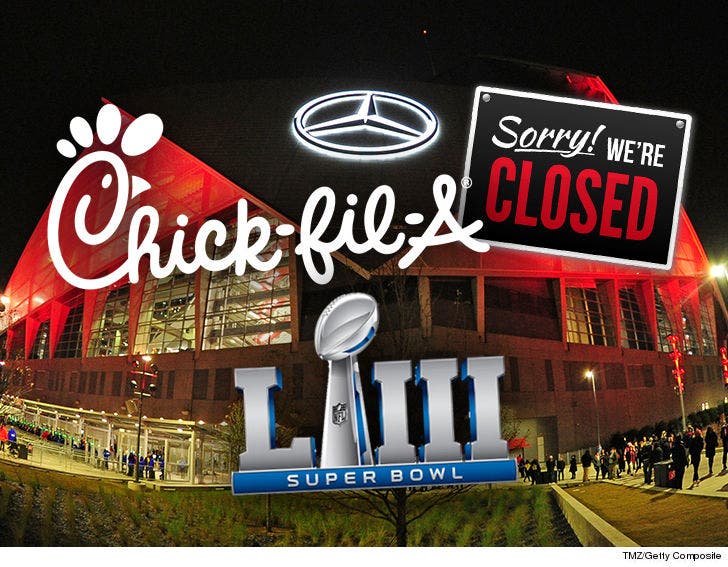 Chick-fil-A is punting on the opportunity to score LOTS of potential cash by refusing to open up one very important location for Super Bowl Sunday.

Sources connected to the fast-food chain tell us the Chick-fil-A stand inside Atlanta's Mercedes-Benz Stadium -- where Super Bowl LIII will be played in a couple weeks -- will, in fact, remain closed on Feb. 3 ... just like every other Sunday before it.

We're told that although the MBS location won't be open, Chick-fil-A is still one of the corporate sponsors for the Atlanta Super Bowl Host Committee ... and our sources say CfA is happy to be there in spirit and through its donation to JFK Park.

Much to the chagrin of foodies everywhere, Chick-fil-A notoriously closes up shop on Sundays to give employees a much-needed day off to be with family or go to church.

That's why folks were thrown for a loop back in 2017 when a location sprung up inside MBS, where the Falcons play on Sundays. The operator has said there's tons of other events happening at MBS throughout the year -- enough so, apparently, to make it worth their while.

Just to give you a sense of how much of a cash cow Chick-fil-A is ignoring for this upcoming game -- it could be in the ballpark of half a mil, more or less. Probably more, though.

This guy says they've sold as many as 5,000 sandwiches in one night. Considering Super Bowl stadiums have hit 100,000-plus attendees in recent years ... that's a potential $409,000 Chick-fil-A is losing out on if everyone bought just one of their basic sandwiches. 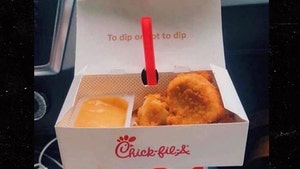