Robert Kraft's facing charges for allegedly soliciting a prostitute in Florida, but he doesn't seem too concerned ... because he's on the opposite end of the country living it up.

We got the New England Patriots owner as he was leaving Barry Diller's pre-Oscars party Saturday afternoon in Beverly Hills ... he hurried to his ride and was mum on being implicated in a prostitution sting Friday.

As we reported ... Jupiter Police Chief Daniel Kerr announced that the 77-year-old Kraft will be charged with 2 counts of "soliciting another to commit prostitution."

Kraft is accused of soliciting a prostitute on at least 2 separate occasions at the Orchids of Asia Day Spa in Florida roughly a month ago. Investigators say they have videos of the men who paid for sex at the massage parlor -- including Kraft -- and the footage is graphic.

A spokesperson for Kraft has denied that he engaged in any illegal activity.

The scandal's apparently not stopping Kraft from hitting up Hollywood hot spots this weekend, though ... just business as usual. 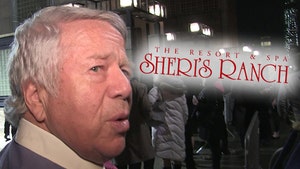 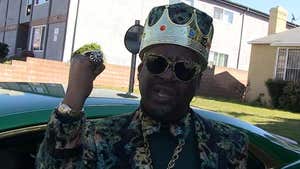