6:09 AM PT -- Law enforcement sources tell TMZ police are actively investigating the fight after a police report was filed. They have spoken with the alleged victim, witnesses on scene, and investigators are also reviewing video.

At this time police do not have any suspects.

A$AP Rocky and his crew pummeled a guy in Sweden, leaving him battered and bloodied in the street ... according to witnesses on the scene.

TMZ obtained video that starts with the rapper having an intense convo with a couple of guys at Max restaurant in Stockholm Sunday night ... allegedly over Rocky breaking a pair of their headphones earlier.

Our sources say the 2 young men kept following AR and threatened to call the cops over the headphones. We're told someone stepped in to translate the argument between the 2 parties, and Rocky delivered this message -- stop following us ... or else. 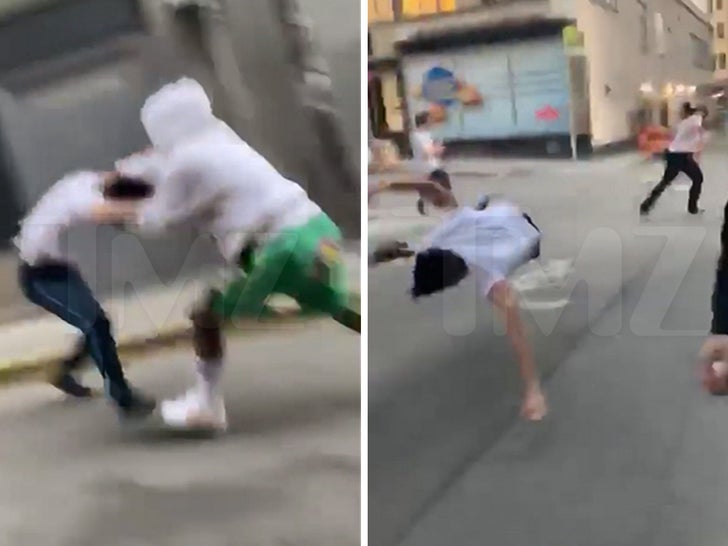 Apparently, that's when another woman interrupted the convo, and accused one of the 2 men of grabbing her ass earlier. Witnesses say that's when A$AP and his crew decided to throw down.

The video shows Rocky -- in a white hoodie and green shorts -- absolutely toss one of the guys like a ragdoll. You can also hear someone smash a bottle during the fight. Three other men, apparently on Rocky's side -- jumped in and joined the beatdown, punching and kicking the guy.

Our sources say Rocky and his crew then took off, leaving the guy knocked out on the ground. An ambulance and cops showed up shortly after and took statements from witnesses.

Law enforcement sources tell us officers are looking into various fights that went down Sunday night in the center of Stockholm, but they had no info about A$AP Rocky being involved.

Sources close to A$AP Rocky's team tell us he and his friends were only responding to "an assault."