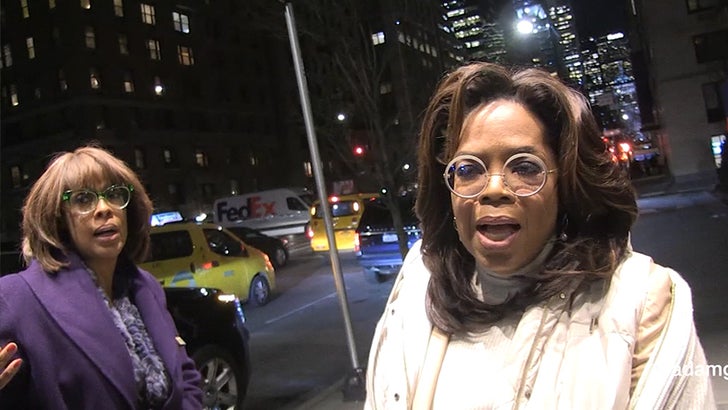 Oprah says she's 100% in support of Prince Harry and Meghan Markle's exit from Royal life because she knows it was NOT an impulsive decision -- no matter what the British media says.

Oprah spoke out Tuesday night in NYC, telling Adam Glyn she has no issue with the Duke and Duchess stepping back and forging their own path, and more than that ... said everyone should respect it.

She says Harry -- and even Queen Elizabeth herself -- made it clear he and his wife had been thinking about this for a long time. O, who ya gotta remember is in business with Harry, says his move wasn't made lightly either. PH noted that last weekend during his speech.

You gotta see how Oprah frames her staunch defense of Megxit -- she says when someone chooses what they believe is best for them, who are we (the public) to criticize that?

Her pal, Gayle King, was there too, and says nobody in the Royal family was "blindsided" ... especially not QE2.

As we've reported, Prince Harry and Oprah are coproducing a mental health series for Apple TV -- so, we expected her to back him -- but her explanation for why might influence other opinions.

It's kinda what Oprah does.