Wilcox is expected to recover and be ready for more drills at USF's Pro Day on March 30.

NFL tight end prospect Mitchell Wilcox just took a ball straight to the face in his combine workout ... and it looked like it hurt like HELL!!!

The audible 'OHHHHH' is amazing. pic.twitter.com/9pm239QGS4

The former USF standout was going through the famous gauntlet drill Thursday ... when for some reason, he didn't put his hands up before the third pass was thrown.

You can see the clip ... the fastball hits him right in the dome -- and it's pretty clear the shot didn't feel great.

To Wilcox's credit, he was able to finish the drill and is still out there chugging along -- although the damage to his face AND his NFL future might already be done.

Aside from getting hit in the noggin in front of a bunch of scouts ... Wilcox ran a slow 4.88 40-yard dash time and stumbled through other parts of his workout as well.

It ain't exactly a great look for the 23-year-old -- but there is hope ... remember the last dude who embarrassed himself in front of a national audience at the combine? 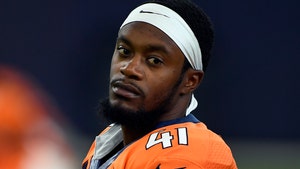