4th of July is proving many Americans don't care coronavirus cases are spiking again, which is in line with the White House's new messaging ...  just live with it.

A handful of water-based venues -- including a water park and two lakeside blowouts -- brought out droves of people this holiday weekend in Wisconsin, Missouri and Michigan ... all of which are seeing their own surges in confirmed COVID-19 diagnoses.

Noah’s Ark Waterpark in the Dells. All things considered, this is a pretty big crowd. I’ve seen a couple of people wearing masks. Hear from the parks GM tonight on #News3Now @WISCTV_News3 pic.twitter.com/lgRJ9aqbyr

That didn't matter to these folks though -- they were ready to get wet and wild for Independence Day, and you can tell by how little mind they're paying to safety precautions.

At the Noah's Ark Waterpark in Wisconsin Dells, WI, hardly anybody was 6-feet apart from each other as they packed the wave pool. And, masks were out the window, obviously -- studies say they're ineffective if they get wet, so a lost cause right off the bat here.

Elsewhere in Missouri ... the same bar adjacent to Lake of the Ozarks -- Backwater Jack's -- forged ahead with their planned Fourth of July blowout, which they dubbed No Ducks Given. Between Friday and Saturday, the place once again resembled a sardine can.

And, in Michigan, another lake shindig was well underway Saturday ... Diamond Lake in Cass County was packed to the gills along its shores with partygoers raging the day away.

Here’s the scene at Diamond Lake in Cass County, Michigan today. Looks like a recipe for disaster...🤦🏽‍♂️ #COVID19 pic.twitter.com/0OfgCXThQw

We've seen this behavior all throughout the spring and early summer -- ever since America was put on high alert and states went on full-blown lockdowns. While the shelter-in-place orders seemed to flatten the curve, there has been an explosion of new cases in the wake of reopening.

And yet ... the bad and dangerous behavior continues, despite what the CDC and other health officials have to say. The question ... what's next? Welp, President Trump's administration seems to have an answer, according to a new report anyway. It's simple ... live life at your own risk. Thing is ... he's been putting people -- his own supporters -- in harm's way by holding reckless rallies with no social distancing and few masks.

NBC News reports that big wigs in Trump's cabinet are ramping up for the new messaging to the American people ... that the virus is here, and we gotta press forward regardless.

Ironically, it appears a large part of the country is already doing that, consequences be damned. So ... carry on? 😬 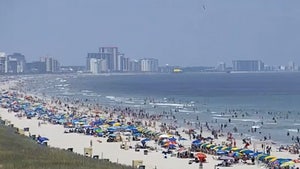