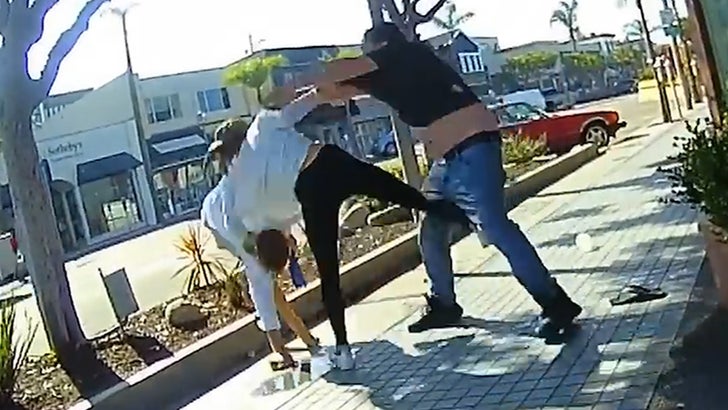 A couple in a SoCal beach town decided it was a good idea to trade in the chill vibe for some hot coffee that the woman hurled in a man's face, and all hell broke loose.

It went down in Manhattan Beach, when 2 guys were sitting outside a coffee joint ... about to eat their meal. A couple walked by and made a point to call out the 2 guys for not wearing masks.

It started out friendly ... the 2 guys ignorantly said they don't believe in wearing masks, and it went from cordial to a fast boil in less than a minute.

The woman then hurls a cup of hot coffee at one of the unmasked guys, and so begins the brawl. The guy beelines it for the couple and punches the guy, causing him to bleed from his nose.

You gotta see and hear what comes next. The guy calls the cops, saying he was assaulted, but never mentions his cohort threw hot coffee at the guy, which by the way, is a crime.

They jawbone back and forth, and at the end of the video, you hear the roar of police sirens as cops arrive. That's where the video ends.

Manhattan Beach requires everyone to wear masks at restaurants when they're not eating, so these guys violated the rules, and also basic decency for others. But, the woman who threw the coffee ... well, that's straight-up a criminal assault and battery.

We contacted the Manhattan PD on what they did ... so far, no response.