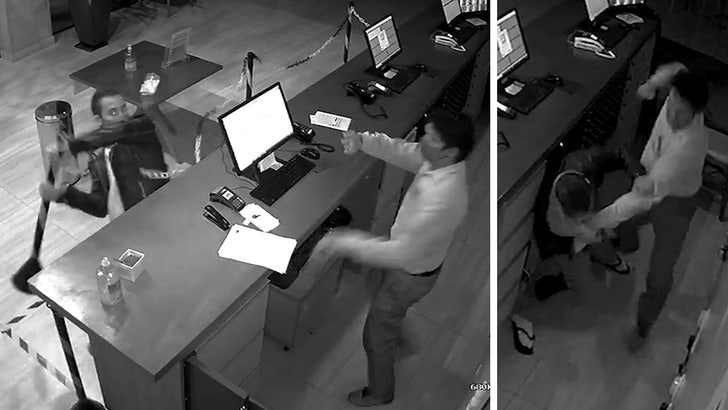 A hotel worker in Brazil earned office bragging rights when he not only warded off an insane attacking customer -- he sent the guy running off with his tail between his legs.

The incident reportedly went down in the city of Varginha, and allegedly started because the guest -- who WAS wearing a face mask -- refused to allow a COVID temperature scan as he checked in.

As you can see in the security footage ... the hotel employee's holding the scanner at the beginning, but sets it down before an argument erupts.

It looked like the customer was gonna walk out, but then he stormed back in and violently swung a chain holder at the worker ... then went behind the counter for some hand-to-hand combat. Big mistake!!!

The hotel worker immediately squared up to defend himself against the guest's punches and unloaded a series of blows himself. He even gets the guy to the ground and continues to pummel him, before the guest was able to retreat.

Bottom line: There's a limit to that "customer is always right" stuff, and this jerk just found it.