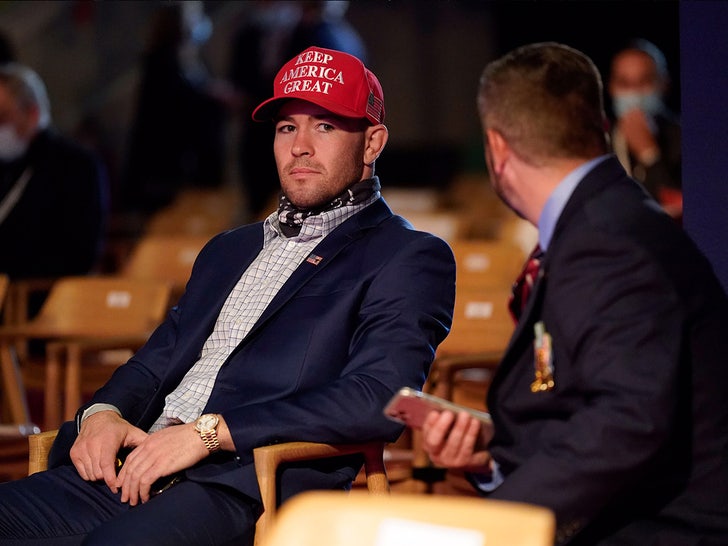 UFC star Colby Covington says he's COVID-Free -- despite being in the room last week for the Donald Trump vs. Joe Biden debate.

Covington -- who's become close with Trump over the past few years -- was invited to the debate in Cleveland on Sept. 29 as a special guest of POTUS.

Now, after Trump and several people close to him have tested positive for coronavirus ... many people were wondering about Colby's health.

Covington responded over the weekend saying he's healthy -- and used the announcement to take a few shots at Trump's critics.

"For the people who constantly slander my name, but are all of a sudden concerned with my health and well being: I’m COVID free," Covington said.

"I’ve been tested 7 times in the past 3 weeks, including prior to and after meeting with the POTUS. I was also tested during fight week, as well as before and after the debate. ALL NEGATIVE."

"Speaking of ALL NEGATIVE," Colby said, "How about all the slime in Hollywood and woke sports wishing harm on a 74 year old grandfather!?! How tolerant! Unfortunately for them and fortunately for America, @realdonaldtrump is a fighter!!! "

"He KO’s the fake news media daily. He KO’d Slow Joe and Chris Wallace at the same time on Tuesday! Now it’s time for a casual weekend KO of COVID! Here’s to a speedy recovery and 4 MORE YEARS!!!"

As for Trump, he's expected to be released from Walter Reed on Monday.