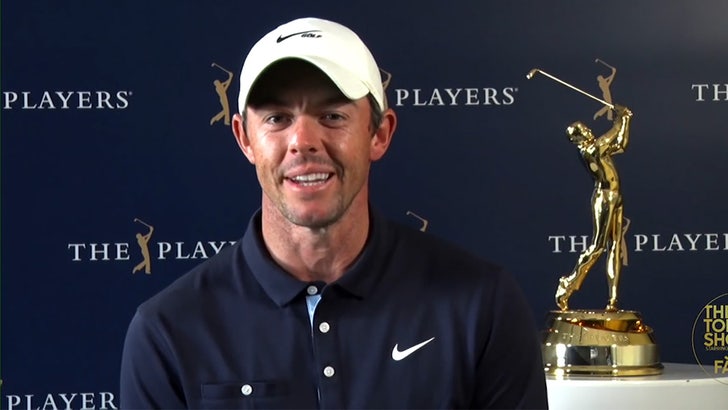 Rory McIlroy -- one of Tiger Woods' best friends on the PGA Tour -- says Tiger is "doing better" after his horrific car crash ... and could be discharged from the hospital in the next week or so.

McIlroy made the revelation on "The Tonight Show Starring Jimmy Fallon" on Tuesday ... saying he's spoken with Tiger since the 45-year-old was seriously injured in a rollover crash on Feb. 23 -- and is getting positive news from the golf legend.

"He's doing better," Rory told Fallon ... "Hopefully if things go well over the next week or so he might be able to get home and start recovery at home."

It'd be great news for Woods ... Tiger's right leg was severely broken in the accident -- requiring multiple procedures to fix the issues since.

McIlroy, though, said Woods has been in good spirits during his recovery ... even sending Rory encouragement -- and even some friendly trash talk -- over his performance at this past weekend's Arnold Palmer Invitational in Florida.

"Even from the hospital bed," McIlroy said with a smile, "he's still giving me some heat."

Tiger has not spoken publicly since Feb. 28 -- when he thanked the pro golfers, including McIlory, who paid homage to him by wearing red and black during their rounds.

"I just think all of us are wishing him a speedy recovery at this point," McIlroy added.