Bob Baffert says he will NOT let Medina Spirit's positive drug test get in the way of his Triple Crown bid ... claiming he plans to run the horse in the Preakness this weekend.

Of course, Baffert was suspended indefinitely by Churchill Downs on Sunday after Medina Spirit was popped for a banned substance following his victory at the Kentucky Derby.

68-year-old Baffert -- by far the most famous and successful trainer in horseracing history -- has repeatedly denied any wrongdoing ... but it's the 5th time one of Bob's horses has tested positive for an illegal substance in the past 13 months and many are skeptical.

"We live in a different world now. This America's different." pic.twitter.com/bsQeiV7oXi

But, Baffert appeared on Fox News Channel's "America's Newsroom" on Monday to defend himself and said matter of factly, "We did not cheat to win the Kentucky Derby."

Baffert claims he has no idea how the substance (betamethasone) got into the horse's system -- but says he's hired his own team of investigators to look into the matter.

"We hired investigators but sometimes you never find out. It’s just a tragedy what happened in this race."

Bob also claims the amount of betamethasone in Medina Spirit's system  was so low, it "wouldn’t have any effect on the horse anyway."

Despite his suspension from Churchill Downs in Kentucky, Baffert made it clear he plans to run Medina at the Preakness on Saturday, set to take place at the famous Pimlico Race Course in Baltimore.

"With all the noise ... We live in a different world now. This America is different. It was like a cancel culture kind of a thing so they’re reviewing it. I haven’t been told anything. We’re prepared to run."

Baffert's attorney, Craig Robertson, also told Fox News ... if Medina Spirit is blocked from the Preakness, they are prepared to file for a temporary restraining order against race officials in the hopes a judge will overrule the ban and clear the way for the horse to run.

Yeah, this is getting intense. 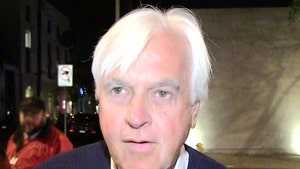 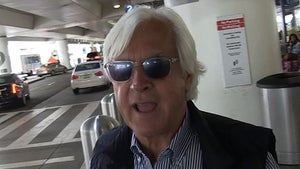