"The Mountain" is looking more like a sculpted rock ... 'cause he's lost a TON of weight over the past two years -- and check out his new bod, he's SHREDDED!!!

Hafthor Bjornsson -- who starred as the big beast on "Game Of Thrones" -- has transformed his body since retiring from strongman competition in 2019 ... moving to the boxing world, and the results are impressive as hell.

Just two days out from his big celeb tilt with arm-wrestling legend Devon Larratt, Bjornsson -- a 3x Arnold Classic and 2018 World's Strongest Man winner -- showed off all the progress he's made with his physique, revealing chiseled abs, pecs and arms.

6'9" Bjornsson told Muscle And Health earlier this month he's down to about 328 pounds -- roughly 120 pounds under the 450-or-so pounds that he used to tip the scales at when he was lifting competitively.

It's all been an effort to dominate in the ring ... with Bjornsson initially setting out to fight fellow strong man Eddie Hall -- his heated rival -- this weekend.

Hall, though, tore his bicep while training in July ... so Bjornsson is now scheduled to fight Larratt -- a dude he once lost to in an arm-wrestling competition.

The scrap is slated for Saturday in Dubai ... and if body composition even remotely translates into fighting skills, someone tell Larratt he might be in a bit of trouble! 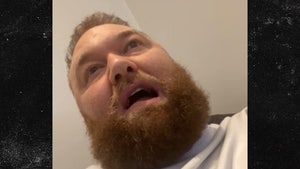 'The Mountain' Claps Back At Eddie Hall, You're Bitter I Broke Your Record 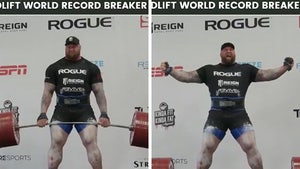 The Mountain from 'GoT' Breaks Deadlift Record, Over 1,100 Pounds