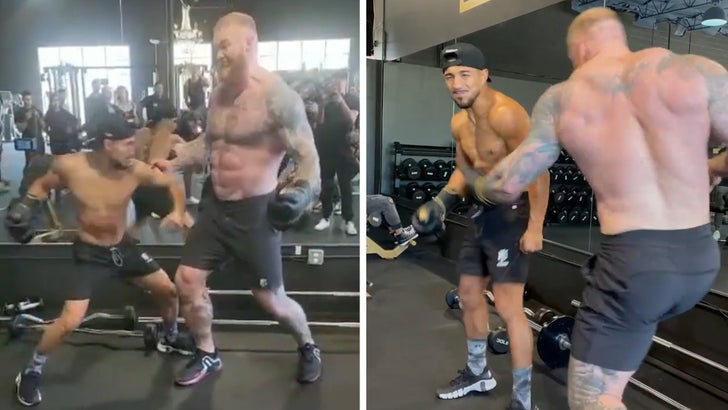 Star boxer Teofimo Lopez took down Vasiliy Lomachenko ... but could he do the same to the 6-foot-9 beast from "Game Of Thrones"??

Turns out ... he couldn't -- 'cause the two traded body shots during an epic training sesh this week, and Hafthor Bjornsson, AKA "The Mountain," appeared to be the winner!!

The two put down the weights and decided to do the body shot challenge in the gym for some reason, and Thor (who's entered the celeb boxing world this past year) REALLY stung Teofimo.

The footage shows Lopez -- who is a foot shorter and about 200 pounds lighter than "The Mountain" -- wasn't exactly KOed by the punch ... but he was winded and admitted, "That was good!"

"That was nice!" the legendary strongman said.

The two then hugged it out -- with Teofimo raising Thor's arm.

"David vs Goliath!" Lopez said of the punch-off. "Went punch for punch with the World’s Strongest Man!"

Lopez will return to fighting people his own size later this year ... he's scheduled to get in the ring with George Kambosos Jr. in November.

As for Thor -- he's still eyeing a celeb match with his strongman rival, Eddie Hall, once the guy gets healthy again.

Should be a great fight ... but someone tell Hall to watch out for left hook to the body! 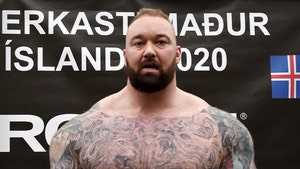