This is AWESOME, baby!!!

Vitale said in a series of tweets that he got the great news from his doctor following a myriad of tests this week.

"Dick u have gone from being in remission to being CANCER FREE,'" Vitale said of what his doctor told him. "Thank u to ALL of YOU that have sent me 🙏🏽🙏🏽🙏🏽"

Thank you to ALL for your kindness ! My 🙏🙏🙏were answered when Dr Brown informed me I was CANCER FREE . Please God let many others waiting for test results hear those same MAGICAL words! https://t.co/qpGSPbgvxe

Vitale previously beat cancer last year, but he was diagnosed with lymphoma a few months later. The 83-year-old was forced to step away from doing what he loves the most -- calling college basketball games -- while he fought it.

To complicate matters further, Vitale developed a throat condition that affected his vocal cords ... and the Hall of Famer required surgery to fix the issue.

But, Vitale made it clear Thursday the medical battles appear to now all be behind him -- and he's stoked.

"I only wish & pray that EVERYONE in the fight vs that vicious disease can receive the message I received last night from my oncologist DR Rick Brown who is the Director of Oncology at Sarasota Memorial Hospital," Vitale said.

"I will continue to follow the advice of Dr Brown & keep having a positive mental attitude with a strong faith & belief that good things will happen."

"Once again I can't THANK all of you enough that have been so caring. The [prayers] & [love] have meant soooooo much. God Bless !" 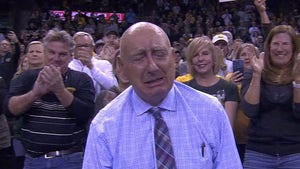