President Biden's decision to pardon all federal prisoners convicted of simple marijuana possession is sitting very well with rappers like Wiz Khalifa ... who tells us he hopes it's just the first step towards more pro-weed legislation.

The Prez outlined his plan for marijuana reform this week ... speaking to that negative impact, and there's widespread hope that the next move could be federal decriminalization of cannabis ... if not outright legalization.

Outside of Snoop Dogg, Wiz is arguably rap music's smokiest cat ... and has been perfecting his own Khalifa Kush brand for some time now.

In addition to his KK and Khalifa Mints strains, he also sells supported merch and delves heavily into the art of cannabinoid science ... through hits of a Taylor Gang-branded, gravity-infused bong!!!

The White House says the Justice Department is actively working to make legalization a reality, but has yet to reveal any sort of timetable.

Wiz says there's no time like the present to fire up new laws!!! 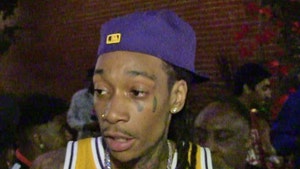