Wiz Khalifa drew the battle lines in his divorce with Amber Rose ... challenging her move to get full custody of their one-year-old son ... TMZ has learned.

Wiz has filed his response to Amber's divorce petition ... he's asking for JOINT CUSTODY of Sebastian. Fact is ... in California it's advantage Wiz because there's a presumption joint custody is in the best interests of a child ... and when a parent asks for sole custody it's often a sign of vengeance.

Wiz also is agreeable on the prenup ... like Amber, he wants it enforced. TMZ broke the story ... Amber is the one who demanded a prenup and she's getting a lump sum payment north of $1 million.

According to the docs, filed by disso queen Laura Wasser, Wiz is also willing to pay Amber spousal support, because we now know the prenup provides that. Sources connected with Wiz and Amber tell us the agreement gives her upwards of $5K a month. 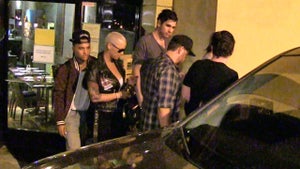 Amber Rose -- Single and Ready to Mingle ... with Rockers