Jason Aldean turning down UFC 216 to do "Saturday Night Live" was a bad move -- so says DJ Clue, who tells TMZ Sports the country music star shoulda come through for the Vegas shooting survivors and first responders in Vegas.

"He should have represented ... and said 'f**k that money,'" Clue told us outside STORY in South Beach.

TMZ Sports broke the story ... Dana White was PISSED when he saw Aldean perform on SNL -- after Jason turned down Dana's offer to sing the national anthem in front of hundreds of people connected to the tragedy.

Dana says Jason's reps told him he was too shaken up to play live -- and the fact that he did SNL on the same night makes him a "coward" that cares about his image more than the shooting victims.

Clue isn't coming at Jason that hard ... stressing that everyone's gotta stay together in times like this.

But would the hip-hop legend have made it out to Vegas? "ABSOLUTELY." 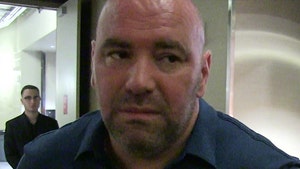