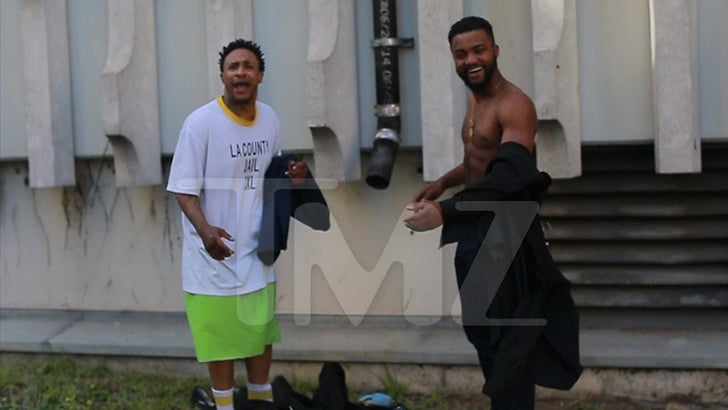 Orlando Brown is back on the outside, and he's got himself nice new duds, too ... all 'cause he was bold enough to ask a random dude near the jail to give him the suit off his back.

TMZ has obtained video from just minutes after Orlando was released from L.A. County Jail Tuesday after a warrant hearing, when we're told he saw two dudes -- Kelvin Asiedu and Raptographer -- doing a photo shoot down the street ... and asked one of them for his outfit -- literally, the one the guy was wearing.

Sure enough, the guys recognized Orlando from his Disney days and happily obliged. Surprisingly, the suit fit ... albeit, it did take a little time to get the pants on.

As we reported ... Orlando was arrested by a bounty hunter in Vegas last week and extradited to L.A. based on outstanding warrants for his arrest. The entire ordeal was pretty dramatic, to say the least ... with Orlando being found in a closet in his underwear.

He's got a full getup now, though -- and hey, it's from Zara of all places. You seeing this, Raven?!