Dana White will eventually change his mind and sign Logan Paul to a UFC fight contract ... at least, Tyron Woodley is convinced that's how it'll go down!

Remember, White crapped all over the idea of Paul getting into the Octagon -- saying the YouTube superstar would get hurt fighting with the trained killers in the UFC.

But, on "The Hollywood Beatdown" this week, Tyron says he watched Logan's boxing match -- and feels the same way as Joe Rogan -- that Paul has some real fighting talent.

Tyron also points out that Dana, to his credit, has reversed course when it comes to UFC policy in the past -- remember when he said women would never fight?

There's more ... Tyron also explains why he probably WON'T fight Ben Askren in the UFC -- but tells us why the newest UFC superstar could cause some REAL problems for guys like Georges St-Pierre.

There's a lot more -- make sure to check out "The Hollywood Beatdown" every Friday on the TMZ Sports YouTube channel. 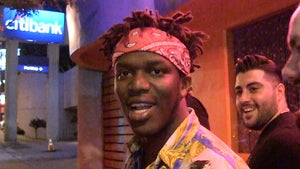