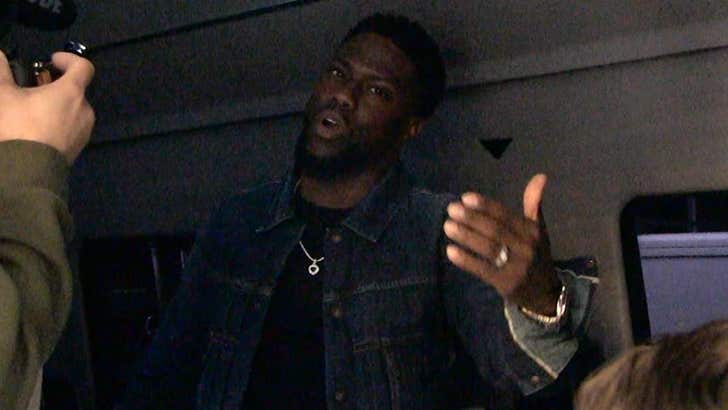 If the Philadelphia Eagles win another Super Bowl, they should cut the crap and make Nick Foles the full-time starter for the 2019 season ... so says Kevin Hart.

Kev is a HUGE Eagles fan (remember when he drunkenly tried to grab the Lombardi Trophy last year?) ... so when we saw him leaving the Barstool Sports offices in NYC on Thursday, we asked how he'd solve the looming QB battle.

TMZ: "If Foles wins you guys another Super Bowl, what do you do with Carson Wentz?"

Kev: "We tell Carson Wentz that he is the reason for our success ... we have to go with Foles right now 'cause Foles is the hot guy."

He continued, "Doesn't mean that Carson Wentz isn't our guy, but ultimately you gotta understand the underdog and the underdog story. Foles is helping build that story."

The QB issue is becoming a hot topic -- because Foles is now 4-0 in his last 4 playoff games ... and the team is playing pretty great right now.

Here's the problem ... if the Eagles want to keep Foles they'd have to pick up his $20 MILLION option -- which Foles has to approve. Lotta cash to spend on a backup QB.

Another option ... the Eagles could franchise Foles for $25 mil and then trade him if the plan is to go with Wentz as the starter.