3/11 -- ﻿J. Prince just weighed in on the situation ... and the Rap-A-Lot Records CEO is standing up for YBN, who is signed to his record label.

J Prince says ... "mob ties call to my real street n****s around the world, but especially on the East Coast in the Bronx. There's a clown by the name of Zae and his crew who want to become famous by bragging about robbing rap industry n****s. They recently bragged about robbing the artist YBN Almighty Jay, who I'm invested in. They've robbed him of his money and jewelry, including a Rap-A-Lot piece. So therefore they have robbed a piece of me."

"This is a perfect opportunity to execute our unity where we don't allow moment thinkers to muddy the water over the movement. With that being said, to the homies in the Bronx, if any of these clowns are yall's family or friends, speak now so we can get an understanding. To ignore this is a recipe for disaster. Other than that, it's these clowns vs. the realest n****s in every hood around the world and that's the meaning of mob ties."

6:40 PM PT -- Sources close to Lil Tjay tell us ... the rapper had nothing to do with YBN getting jumped later on after the street scuffle. Lil Tjay also shared a message for YBN on Instagram, saying ... "Keep ya head up bro stay strong."

YBN Almighty Jay got his ass handed to him and his chain snatched in an NYC street fight and, unfortunately for him, there's video of the whole beatdown.

The brawl erupted outside a Saks store, of all places ... we're told the 19-year-old rapper was shopping with his pals when another up-and-coming young rapper, named Lil Tjay, walked in with his squad. Witnesses say both sides started squawking, and then it got physical.

The fight spilled out into the street and, at first, it looked like Almighty Jay's side was holding their own. Later, though ... Jay got separated from his homies and you see him getting kicked HARD in the head by at least 2 guys.

We're told the guys who jumped him made off with Jay's wallet, his YBN chain ... and his shoes. Damn. Took the man's shoes.

Police were called, but no one wanted to report a crime. 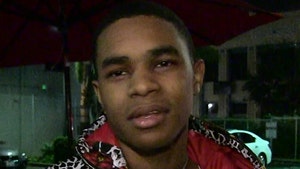