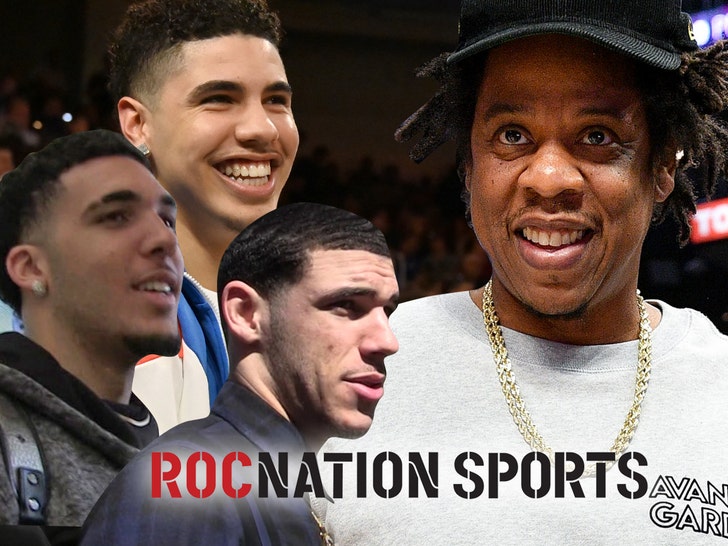 The Ball Brothers are joining a new family -- the Roc Nation Sports fam -- with LaMelo, Lonzo AND LiAngelo Ball all planning to sign with Jay-Z's sports management company.

Melo's business partner, Jermaine Jackson, went public with the decision on Monday ... saying the whole family is on board.

"This was a family decision," Jackson said in an interview with ESPN. "This is now an extended family. They put together a beautiful game plan with Jay-Z."

Jackson says the family had been shopping for an agency and spoke with "several agents" -- but ultimately, "The family had good vibes with Roc Nation."

Jackson added ... "I've known Jay-Z since I played for the Knicks, but this is what the kids wanted to do. Jay-Z is a master at what he does. He's global. It's power beyond power."

Roc Nation will take the lead on marketing deals for the Ball bros -- including LaMelo's shoe deal.

Of course, LaVar Ball has put tons of work into rebuilding the Big Baller Brand ... but Jay-Z is the creative director for Puma Basketball ... so it'll be interesting to see how that shakes out.

"He's still wide open," Jackson said ... "He hasn't signed with anyone. Everyone is kicking in the door. Melo is open to whatever. With this pandemic going on, we don't know what things are going to look like."

Jay-Z has been a longtime supporter of the Big Baller Brand -- he was one of the first big stars to say he bought the $495-per-pair ZO2s when they launched a few years back.